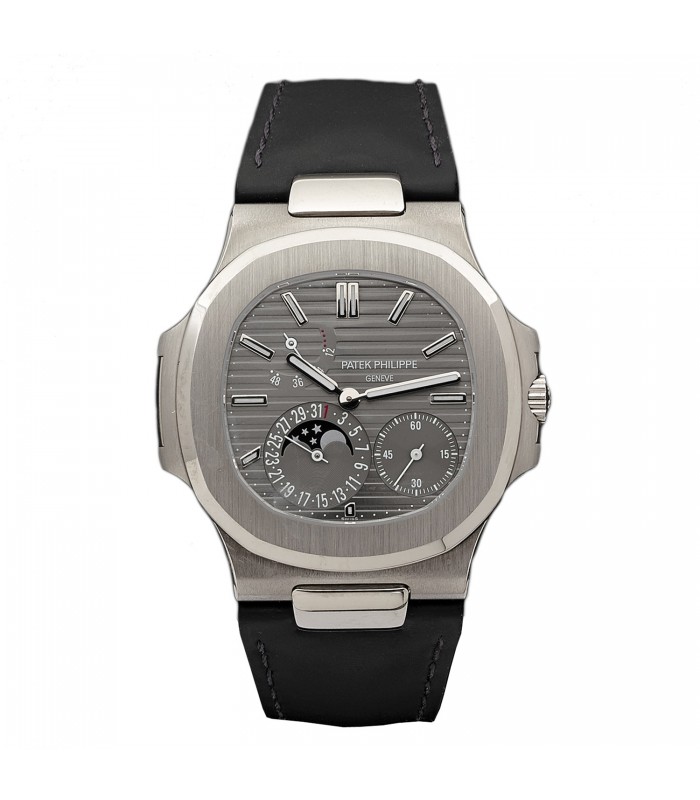 Montre Patek Philippe Nautilus 5712
The history of the Patek Philippe Nautilus is closely linked to the history of another iconic timepiece, the Audemars Piguet Royal Oak, whose creation in 1972 defined the whole new category of luxury wristwatches in stainless steel. Following the growing success of the Royal Oak, Patek Philippe decided that it was time to also develop an exclusive sport watch with finishes of the highest quality. For Patek Philippe this new model had a key role for its overall marketing strategy as it had to refresh the brand image while perpetuating tradition. The target was represented by dynamic business managers of the new generations. Who could be the designer of this new watch if not Gerald Genta, the father of the Royal Oak? In an interview dating back to 2009, Gerald Genta remembers that he designed the watch that was later named Nautilus during the Basel Trade Fair: "I was at the restaurant of a hotel and some people from Patek were sitting in one corner of the dining hall, while I was sitting alone in the other corner. I told the head-waiter: “Bring me a piece of paper and a pencil, I want to design something” and I designed the Nautilus while observing the people from Patek eating! It was a sketch that I completed in 5 minutes". Genta's illustration below was based on that initial sketch. The inspiring idea was the shape of a porthole, like those that could be found on transatlantic liners. The patented case was formed by a solid backcase/middlecase monobloc and the distinctive octagonal bezel secured to it by four lateral screws to ensure water-resistance. Each of the eight sides of the bezel were subtly curved to trace a perfect arc of a circle, a subtle detail making a big difference from a design point of view. The black dial, strongly characterised by horizontal embossed bars, had applied luminous white gold baton hour markers, luminous hands, and the date window at 3 o'clock. A fully integrated bracelet with folding clasp contributed to the personality of the watch. The name of the watch was taken from the Jules Verne's novel "Twenty Thousand Leagues Under the Sea" where Nautilus is the submariner used by Captain Nemo. It was a lucky choice although the new watch was not actually a professional diver even if it offered a water resistance of 120 metres thanks to the particular structure of the case. In fact, the combination of the wide lugs with the lateral ears provided uniform compression on a rubber gasket that allowed the case to become more resistant to penetration as water pressure increased. The original Nautilus, reference 3700/1 in stainless steel, was finally introduced in 1976. This model was later nicknamed "Jumbo" for its generous size. At the time a diameter of 42 mm was considered pretty large. The watch was also very thin with a height of just 7.60 mm. To power the watch, Patek Philippe used the automatic calibre 28-255 C, based on Jaeger-LeCoultre's caliber 920. This same movement was used in the first Audemars Piguet Royal Oak reference 5402 and in the Vacheron Constantin 222. In 1978 Patek Philippe created a prototype with a ribbed white dial manufactured, like the black ones, by the Stern Freres dial factory. It is interesting to mention that in 2015 this ultra-rare prototype was sold at Sotheby's Geneva for an impressive amount of Swiss Francs 250,000 which confirms the interest of collectors around the Nautilus. It was only in 2012 that Patek Philippe added white dial versions of the Nautilus to its catalogue. In 1980 Patek Philippe launched the Nautilus for Ladies (reference 4700) and one year later the mid-size reference 3800/1A with a reduced diameter of 37.5 mm, an alternative to the big size of the 3700/1 model which, initially, received a tepid response by watch enthusiasts. Reference 3800/1A featured central seconds and the new calibre 335 SC, the result of Patek Philippe’s decision to develop its own slim movement. With reference 3710/1A, introduced in 1998, Patek Philippe added a complication to the small date. The black dial - with no bars - was characterized by applied Roman numerals and a power reserve indicator at 12 o'clock. Housing the calibre 330 SC, the case had a width of 42 mm and a thickness of 8 mm. The next step, in 2005, was a triple complication model - ref. 3712 - featuring a power reserve indicator, analog date and moon phases. To power the watch the 240 PS automatic movement with a gold micro-rotor and sapphire crystal to display the beautiful calibre. Reference 3712 had a short life. In fact, it was discontinued after just one year (for the joy of many collectors) because in 2006 Patek Philippe introduced the new generation of Nautilus models. 30 years after the original creation of Gerald Genta, Patek Philippe presented a revamped model, identified by reference 5711/1A, with a slightly larger 43 mm case, a dial with central seconds and Patek's caliber 324 SC to power it.