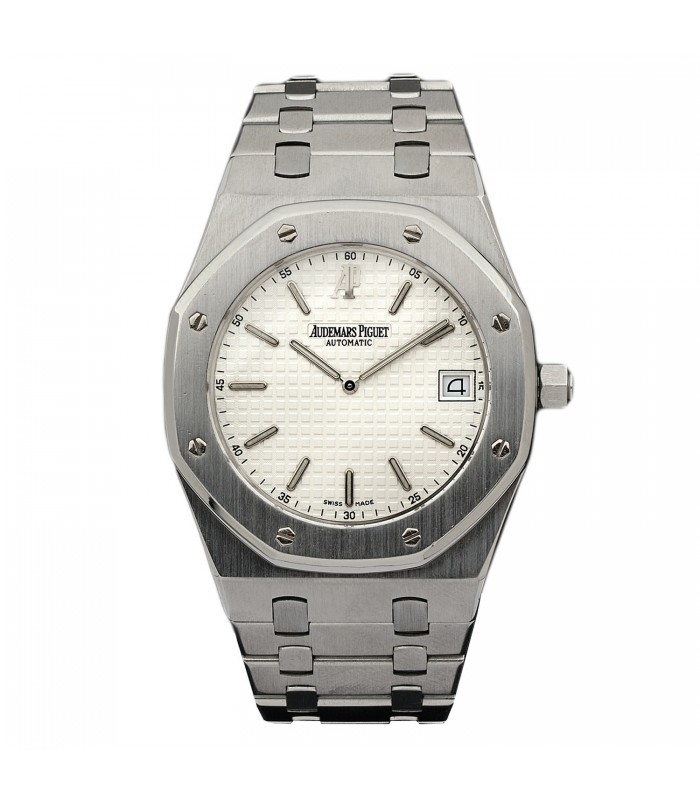 Montre Audemars Piguet Royal Oak
In April 1972, Audemars Piguet participated in the annual European watch-making fair in Basel, Switzerland. On the eve of the fair, AP's managing director, Georges Golay, called the designer Gérald Genta and told him that the Italian market was expecting an "unprecedented steel watch". Golay needed a special watch to present at the fair. In less than a day, Gérald Genta invented the Royal Oak, which became AP's masterpiece. The look of the watch was inspired by what Genta had seen on the shores of Lake Geneva: a diver being fitted with a diving helmet. The Royal Oak was characterized by a revolutionary design in the form of a rounded octagon. At the time, luxury watches on the market were all round, slim and in gold. Genta designed an avant garde octagonal watch in steel with sharp angles and visible screws. Priced at 3,650 Swiss francs when first launched, it was the most expensive luxury sports watch, priced ten times more than a Rolex Submariner (costing around 300 Swiss francs in circa 1973). The Royal Oak was the first high-end sports watch made of steel, recognizable by its octagonal bezel with eight hexagonal white gold screws, the guilloche engraving on its dial (known as grande "tapisserie"), its integrated bracelet and eight visible bolts on the back. The watch was slim (7mm) and had a case diameter of 39mm. The cost for producing the case (not including the material) of the Royal Oak in steel became much more expensive than a similar gold watch. On 6 September 1651 Oliver Cromwell's troops pursued King Charles II, the future king of England, Scotland and Ireland. To escape them, he took refuge in the branches of an oak tree. The tree became the Royal Oak and a symbol of power and protection. In commemoration of this historical event, eight ships of the British Royal Navy took the name of HMS Royal Oak between 1664 and 1939. Gérald Genta took inspiration from one of them, built in 1862. This battleship was reinforced with steel plates, had octagonal gun ports for its cannons that were secured by eight visible bolts. These features served as a basis to imagine and create the shape of the watch case. When the Royal Oak was released in 1973, the idea of making a high-end sports watch in stainless steel was considered a high risk. Its price and original design disconcerted the market. Therefore, its launch was slow at the beginning. But collectors and trend setters began adopting the watch and the Royal Oak became a success. The first series of 2000 Royal Oak (called the A-series) took more than a year to sell. These watches are the most sought after by collectors. They recognize them by the AP initials placed above 6 o'clock rather than at 12 o'clock like successive series. At the beginning, AP made a limited edition of 1,000. In 2000, the brand finally sold 100,000 Royal Oak. The watch represents around 45% of global sales. The first Royal Oak featuring a perpetual calendar caliber 2120/2800 was designed in 1981 to be the world's thinnest timepiece. The Royal Oak Day Date Moonphase was then launched. In 1983, the Royal Oak was equipped with lunar phases and a lunar calendar. One year later, the watch had a perpetual calendar. In 2004, Audemars Piguet created the Royal Oak hand-wound tourbillon chronograph, a limited edition of 20 pieces. This watch had a double ten-day power reserve indication and a 30-minute counter. Its case and its bracelet were made of platinum.