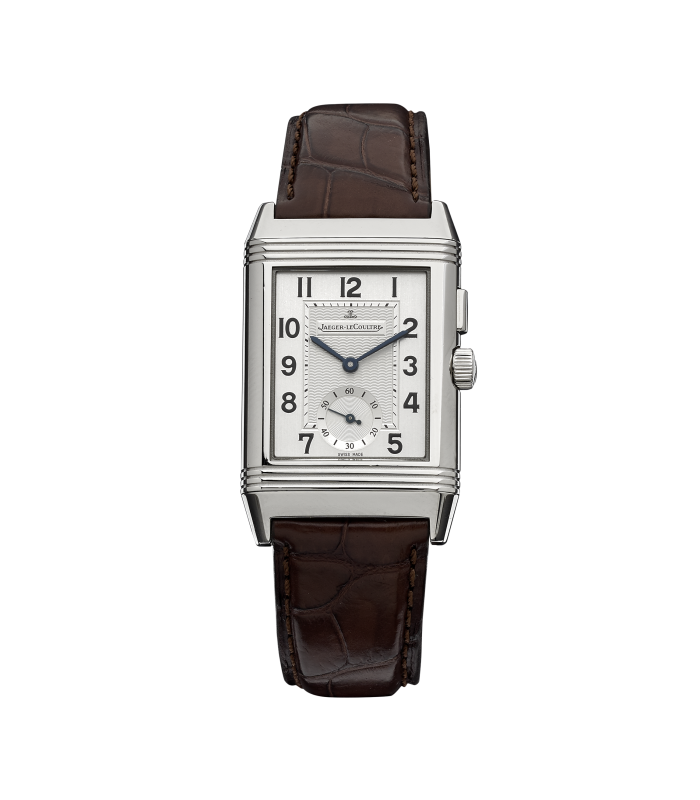 Montre Jaeger Lecoultre Reverso Night and Day
The Reverso, was introduced to the market in 1931 by LeCoultre, designed as a response to adversity: For polo-playing British officers in India it was always a great annoyance when the delicate crystals of their wristwatches were broken during the competition. The watch importer César de Trey described the problem to his supplier Jacques-David LeCoultre, who together with his partner Edmond Jaeger and the Parisian engineer René-Alfred Chauvot developed the watch with the "twist": A case in steel, which can slide on a holder and swivel completely. This means, in dangerous moments, the delicate glass can disappear inside. On 4 March 1931 this idea was registered as a patent. Shortly afterwards, the watch went into series production. The Reverso lasted in production as the first "sports watch" until World War II. The Reverso was a challenge for Jaeger-LeCoultre to produce at first. Designed under contract to Jaeger (then a separate firm), it was intended to use a LeCoultre movement. But no appropriate movement was available and Jaeger was unable to produce the cases in time. Therefore, the earliest Reversos feature cases by A.E. Wenger and movements by Tavannes (often signed "Lisica"), although final assembly was handled in Le Sentier by LeCoultre since the very beginning. Starting in 1933, LeCoultre brought the movements in-house with their specially-designed JLC 11 U calibre (15 jewels, 18,000 vph, 50 hour power reserve). Eventually, 11 different movements were used in pre-war Reversos. In 1972, Jaeger-LeCoultre's Italian distributor noticed many unused Reverso cases in the factory and asked for the company to restart production for him. The Reverso was officially reintroduced in 1982 as the squared-off Reverso II, first a historical curiosity, but in 1985 the company re-committed to the model with a newly-designed water-resistant case. The Reverso became the company's signature product in 1991 with a special anniversary "60eme" model, leading to many complications and models. The Reverso Duoface, introduced in 1994, was a technical feat, with a single movement driving dials on both sides, along with the 1997 Duetto for women. Strong sales have driven the watch to become one of the company's most popular models. Today, the watch with the "two sides" is produced in many variants and is regarded as a beautiful, timeless classic that embodies the Art déco style perfectly. Due to its continuing popularity it is one of the pillars of the model range of Jaeger-LeCoultre and has contributed significantly to the reputation of the brand.