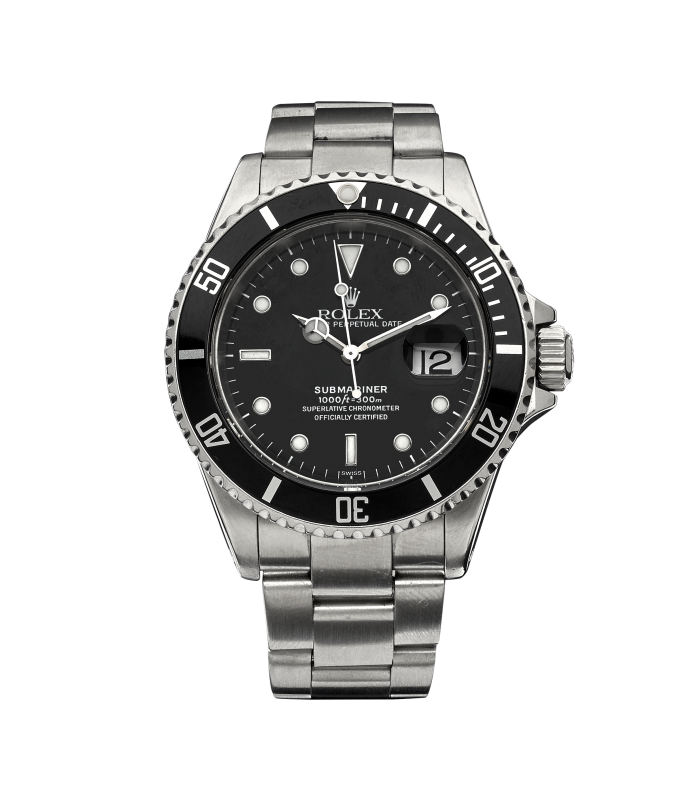 Montre Rolex Oyster Perpetual Date Submariner
The Rolex Oyster Perpetual Submariner is a line of sports watches designed for diving manufactured by Rolex, known for their resistance to water and corrosion. The first Submariner was introduced to the public in 1954 at the Basel Watch Fair. The Rolex Submariner is considered "a classic among wristwatches", manufactured by one of the most widely recognized luxury brands in the world, and due to its popularity has become the subject of massive counterfeiting. The Rolex Submariner is part of Rolex's Oyster Perpetual line. The Submariner model went into production in 1953 and was showcased at the Basel Watch Fair in 1954. The assigned case reference number of this first Submariner was either 6204 or 6205. It is unclear which model came first; in any event, the two watches are nearly identical. Neither has the distinctive "cathedral" or "Mercedes" hands now so strongly associated with the Submariner line. Rather, both of these early submariners have straight "pencil" style hands. Few, if any, of the 6205 watches bear the name "Submariner" on the dial, a major distinction of modern Submariners. Some 6204 models have the Submariner logo printed below the center pinion, while others have the logo blacked out. It is believed that there were unexpected trademark issues connected with the name "Submariner" at the time the 6204 and 6205 were released, accounting for the inconsistent use of the Submariner mark on these early Submariners. Trademark irregularities notwithstanding, both the 6204 and 6205 are designated Submariner models in Rolex product literature. n 1954, Rolex also produced a small number of ref. 6200 Submariners. This was the first Submariner (although not the first Rolex) to make use of the Mercedes hand set, a feature of all subsequent Submariners. The 6200 also featured an oversized winding crown compared to the 6204 and 6205 models. Within a few years, Rolex revised its Submariner line, producing the 6536 (small crown) and 6538 (oversized crown) models. These watches had "improved" movements (the cal. 1030), including a chronometer version in some 6536 models (designated 6536/1), the now-familiar Mercedes hands, and the Submariner logo and depth rating printed on the dial. By the early 1960s, these models had given way to the 5508 (small crown) and 5510 (large crown) models. All of these early Submariners used either gilt (6200, 6204, 6205) or gilt/silver gilt (6536, 6538) printing on glossy black dials. Radium paint was used for the luminous indices. The next wave of Submariners, the 5512 (chronometer version) and 5513 (non-chronometer), marked a significant change in the appearance of the popular Rolex design. "Shoulders" were added to the crown side of the case to provide protection for the winding/setting mechanism. In early watches—until 1964 or so—these shoulders were pyramid-shaped and ended in points. Later watches were manufactured with rounded shoulders. The 5512 and 5513 were both fitted with the oversized crown, which thereafter became a standard feature of the Submariner line. In the early 1960s, Rolex discontinued the use of radium paint for the luminous indices, switching to safer tritium-infused paint. In 1965–1966, Rolex discontinued use of gilt/silver gilt dials on the Submariner watches, switching to white printing. A final important change came with the introduction of the 1680 model in the late 1960s: the 1680 was the first Submariner to be equipped with a date function, marking the completion of the transition of the Submariner line from specialist tool watch to mass market fashion accessory. While many professional and military divers used—and continue to use—Submariners in the most demanding underwater environments, by the late 1960s, the watch had undeniably become a mass market product as well. Throughout the next 40 years, the Submariner was updated with improved water resistance, new movements, and numerous small cosmetic changes. In 2003, Rolex celebrated the Submariner's 50th anniversary by launching the Rolex Submariner-Date anniversary edition (16610 LV), with distinguishing features such as the green bezel and Maxi dial; its production ended in 2010 with the final watches being issued with the new "random" serial number. In 2008, a new case from the GMT II was introduced for the Submariner-Date, featuring heavier lugs and crownguard; a cerachrome bezel and updated clasp featuring a quick adjust function were also added. The 14060M did not have these modifications. A new Submariner-Date, model 116613 (not to be confused with model 16613), based on the "supercase" used in the GMT II, was presented at the 2008 Basel show. The first Submariner-Date models offered were a yellow gold with blue face and bezel and a new white gold with blue face and bezel. The stainless steel case model was presented at the 2010 Basel show. Its reference is 116610. At the 2012 BaselWorld watch show, an updated Submariner ref 114060 was introduced. It replaced the 14060M, with newer "Maxi Case" with "Chromalight" hour markers, ceramic bezel, blue Parachrom hairspring and bracelet with "Glidelock" extension system.