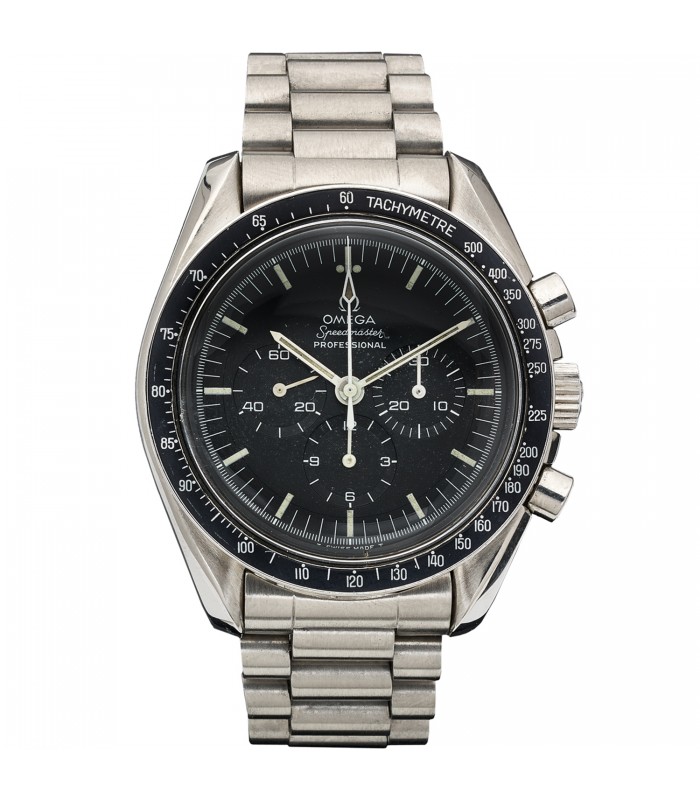 Montre Omega Speedmaster Professional
Omega Speedmaster is a line of chronograph wristwatches produced by Omega SA. While chronographs have been around since the late 1800s, Omega first introduced this line of chronographs in 1957. Since then, many different chronograph movements have been marketed under the Speedmaster name. The manual winding Speedmaster Professional or "Moonwatch" is the best-known and longest-produced; it was worn during the first American spacewalk as part of NASA's Gemini 4 mission and was the first watch worn by an astronaut walking on the Moon during the Apollo 11 mission. The Speedmaster Professional remains one of several watches qualified by NASA for spaceflight and is still the only one so qualified for EVA. The Speedmaster line also includes other models, including analog-digital and automatic mechanical watches. he Speedmaster was not originally designed for space exploration. Instead, it was introduced in 1957 as a sport and racing chronograph following on from the early chronographs of the 1920s and 1930s, including the Omega 28.9 chronograph, which was Omega's first small wrist chronograph, complementing Omega's position as the official timekeeper for the Olympic Games. The first Speedmaster model, the reference CK 2915, was powered by the Omega Calibre 321 movement. This movement was developed in 1946 by Albert Piguet of Lémania, which had been acquired in 1932 by Omega's parent company, Société Suisse pour l'Industrie Horlogère, (SSIH). The "Speedmaster" name was coined from the model's novel tachymeter scale bezel (in brushed stainless steel) and by the convention set by prior Omega brands Seamaster and Railmaster. The model established the series's hallmark 12-hour, triple-register chronograph layout, domed Plexiglas crystal (named Hésalite), and simple, high-contrast index markers; but, unlike most subsequent Speedmaster models, it used Omega's broad arrow hand set. In 1959, a second version, CK 2998, was released with a black aluminum base 1000 bezel and later in 2998-2, tachymeter 500 bezel and alpha hands. This was again updated in 1963 by references ST 105.002, which kept the alpha hands and then less than one year later ST 105.003 with straight baton hands and ST 105.012, the first Speedmaster with the "Professional" appellation on the dial, with an asymmetrical case to protect the chronograph pushers and crown. All of the early Speedmasters used the same Calibre 321 movement, which was only replaced in 1968/1969 with the introduction of the Calibre 861 movement, used in the "Moon watch". The watches used for Apollo 11's mission were the 1967 "pre-Moon" 321 versions.

Omega Speedmaster Blue Side of the Moon watch